For several years, I have been struggling with atmospheric noise on the 160 meter band. I have no space on my city lot for a K9AY Loop or a Beverage antenna. On one of the reflectors I saw a comment by N7TK, John, that he uses a coaxial loop on 160 for receive. I asked him about his success and his response was favorable enough to try one myself. I have read in various books including the ARRL Antenna Book and ON4UN Low Band DXing book that these loops are primarily used for manmade noise rejection. But they are at the bottom of the ladder compared to Beverage and AY Loops in performance. Nonetheless, I thought that I would try one. I hopped into the car and went to the local Comcast center to see if I could get a donation of hardline coax scraps. It was my lucky day, they were taking down a 100 ft tower that was loaded with coax. I got about 100 feet in 20 and 40 ft pieces. They even delivered it to my home for $25 donation to the beer fund. The following pictures and text show how I built it. I am extremely pleased in it's performance. No longer are my ears burning with high levels of noise when trying to pick out a signal.

I decided that a 6 ft diameter loop would work out in terms of available space. That calculates out to 6 x Pi = 19 ft of coax. I measured the halfway point and cut out 1 inch of the aluminum shield using a copper pipe cutter. Then with the help of my wife, and using the patio table as a form, we bent it into a circle. I used 3/4 inch CPVC tubing to make the crossmembers and support at the top of the loop to keep the loop from kinking after the shield was removed since it is now a weak point in the coax. 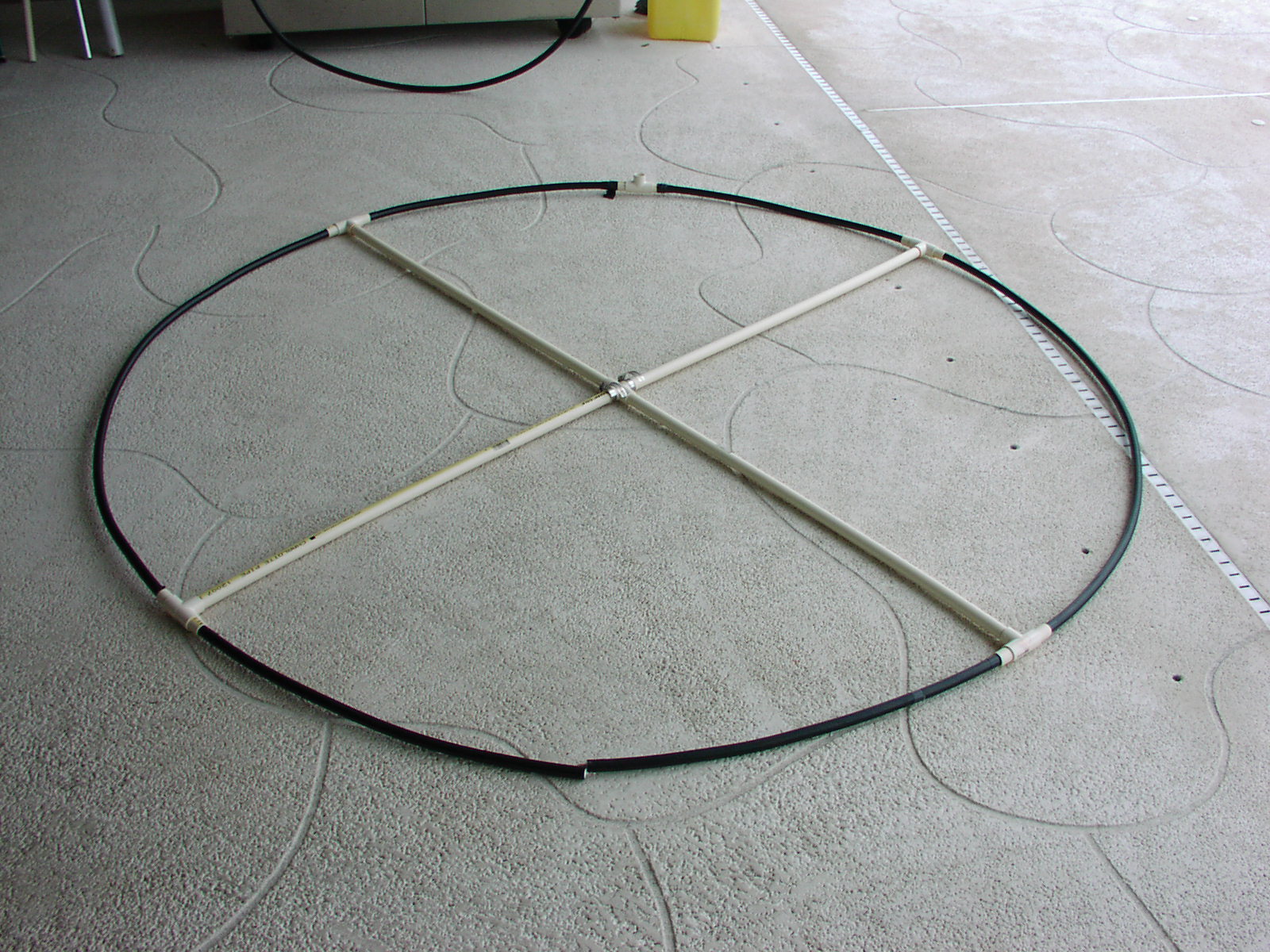 Here you can see the cut in the shield and the T fitting ready to slide into place.As I said, I used a pipe cutter to break the shield then I used a Dremel tool with a saw blade bit to slice the shield lengthwise so that I could separate it and remove it. 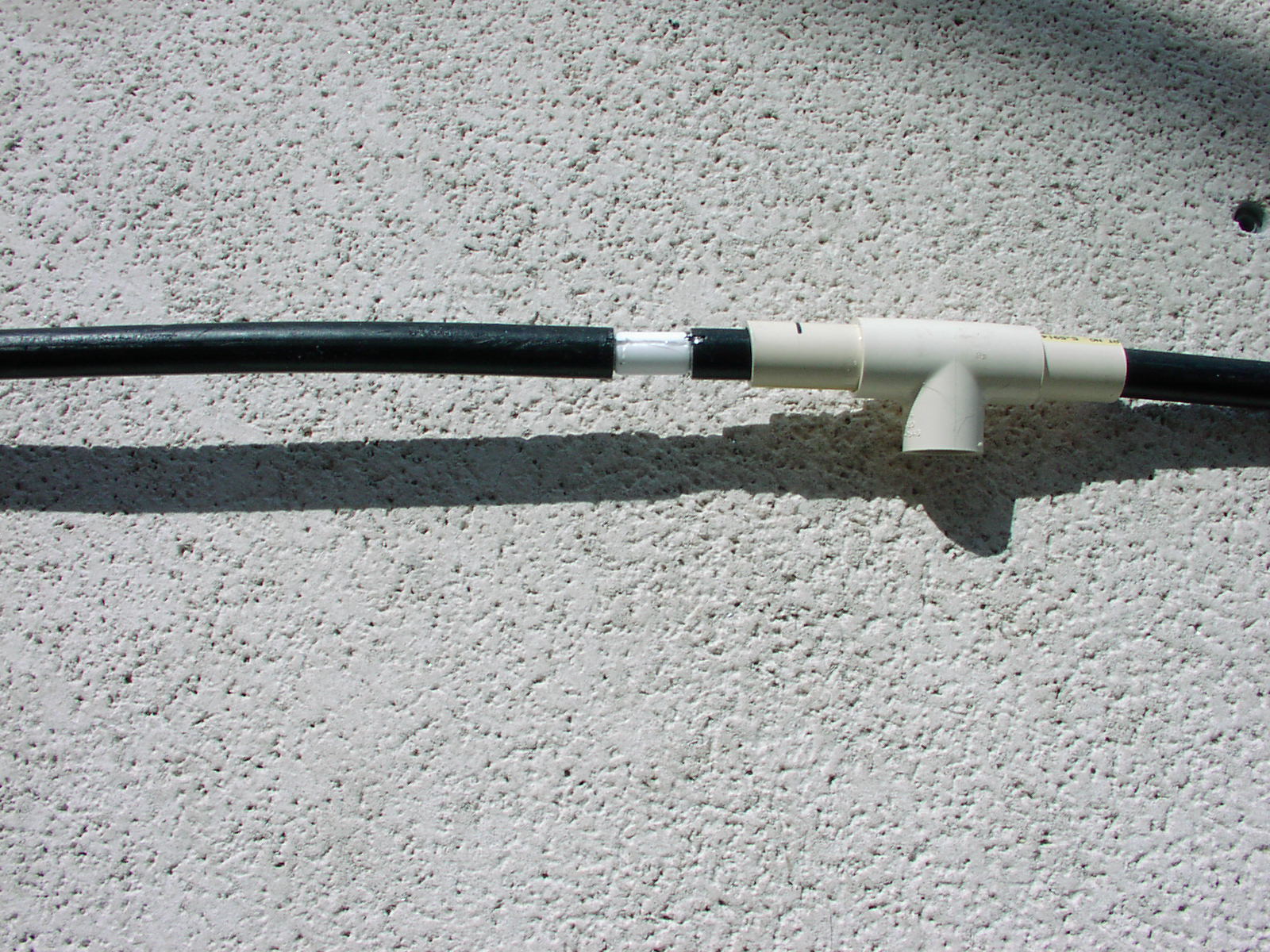 Here is the T fitting slid over the coax shield break. 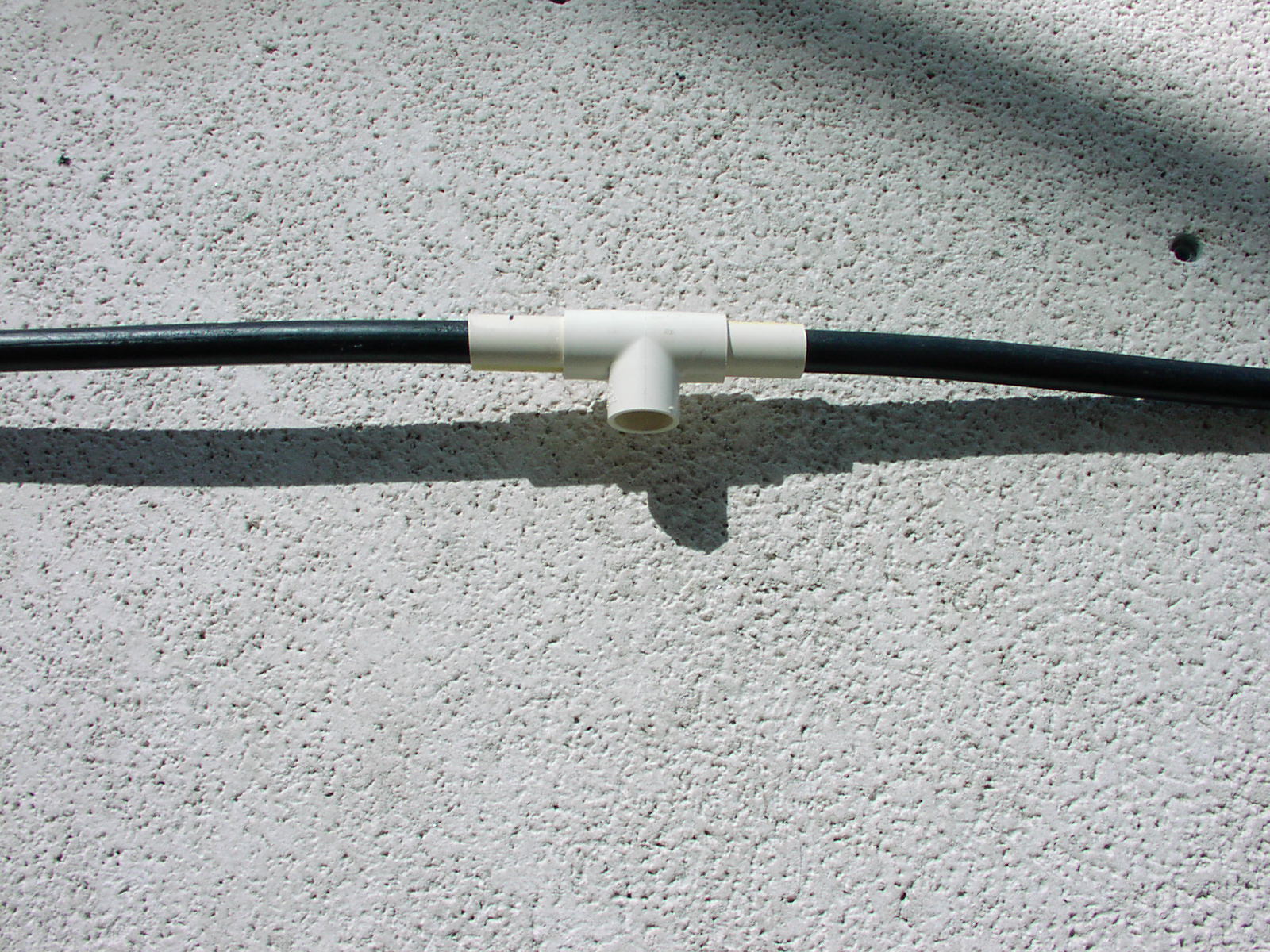 Next step was to bare the center conductor at the bottom of the loop and make measurements with my MFJ-259B SWR Antenna analyzer. It is necessary to measure the SWR, XL, XC, R, C and L at the frequency that you want to center the SWR Bandwidth on. Keep the coax from the MFJ to the clip leads as short as possible . 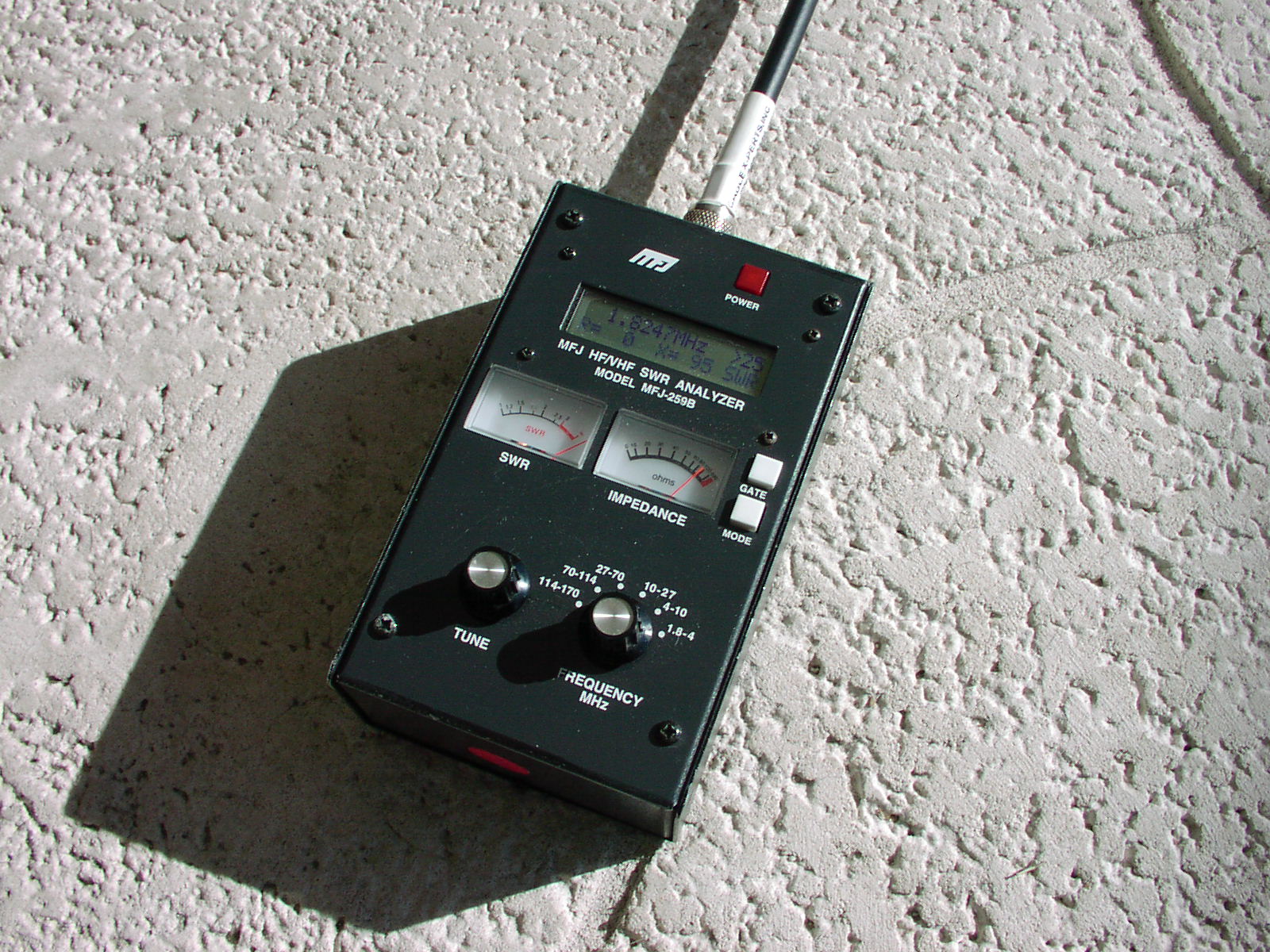 Loop Box prepared for hardline cable. I attached an aluminum box purchased from DigiKey Corp. Drilled holes in the sides for the hardline and then I took 3/4 inch CPVC tubing and secured it by taking CPVC couplers and cutting 3/4 inch off each side of the coupler. These pieces are glued together to keep the CPVC tubing from sliding in/out of the box. This assembly prevents chafing of the coax jacket and makes a nice snug fit for the coax. The terminal strip istands on standoffs to align the coax and provides a convenient mount for the trimmer capacitor. The box is grounded to the coax shields through the standoffs and the wires shown which will connect to the coax shield. 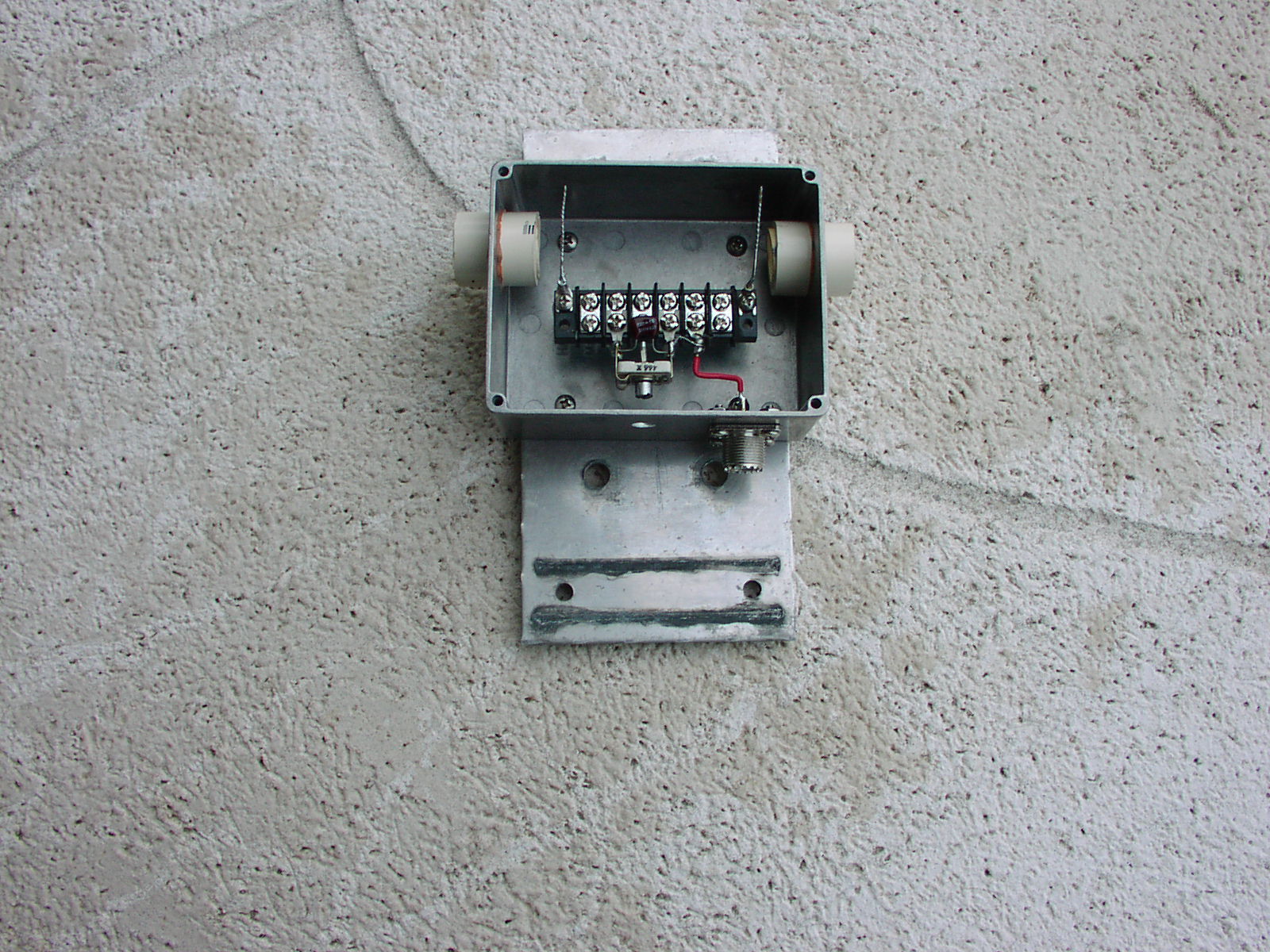 Here is the Loop box with all connections made. I used a piece of RG-58 Braid to join the two ends of the hardline shield. They are hose clamped onto the hardline. You cannot solder to aluminum shield. The hose clamps also keep the coax from trying to slide out of the box. The trimmer capacitor is connected through the terminal strip by wires to the center conductor of the hardline. 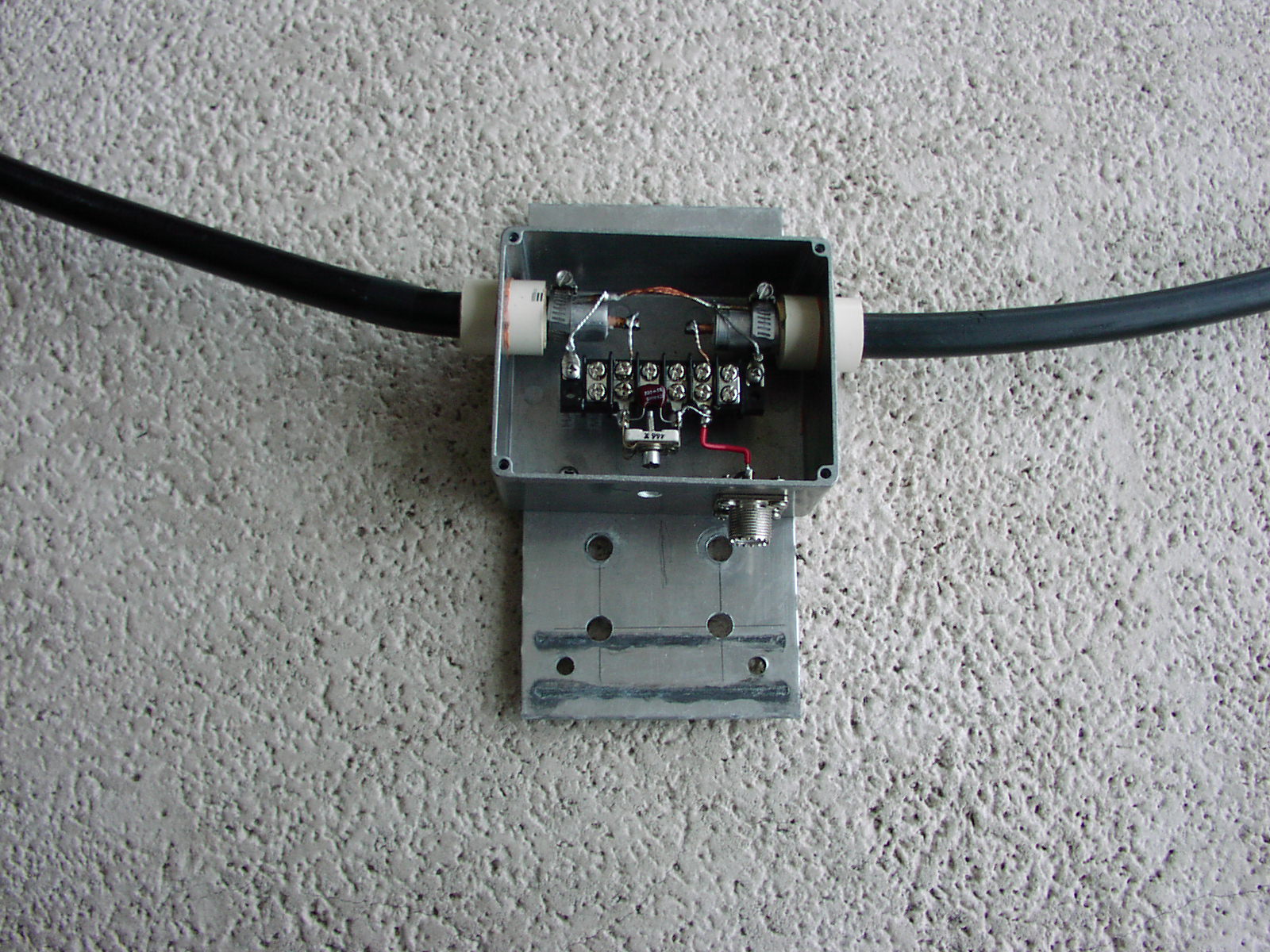 Now the MFJ Analyzer is connected by a 6 inch piece of coax and the trimmer is adjusted for low SWR at the frequency of interest, in my case it is 1.825 MHz. Initially, I made the final measurement with the loop laying on concrete, but when I mounted the loop in it's permanent place, the tuning was way off. The concrete has a big influence on the tuning. So, it is best to mount the antenna first then adjust the trimmer.

Here is the loop mounted on a TV rotator 3 ft above the ground. I used another piece of PVC, 1 inch, to support the loop at the top and into the rotator. Then used electrical tape to join all PVC at the center cross point. 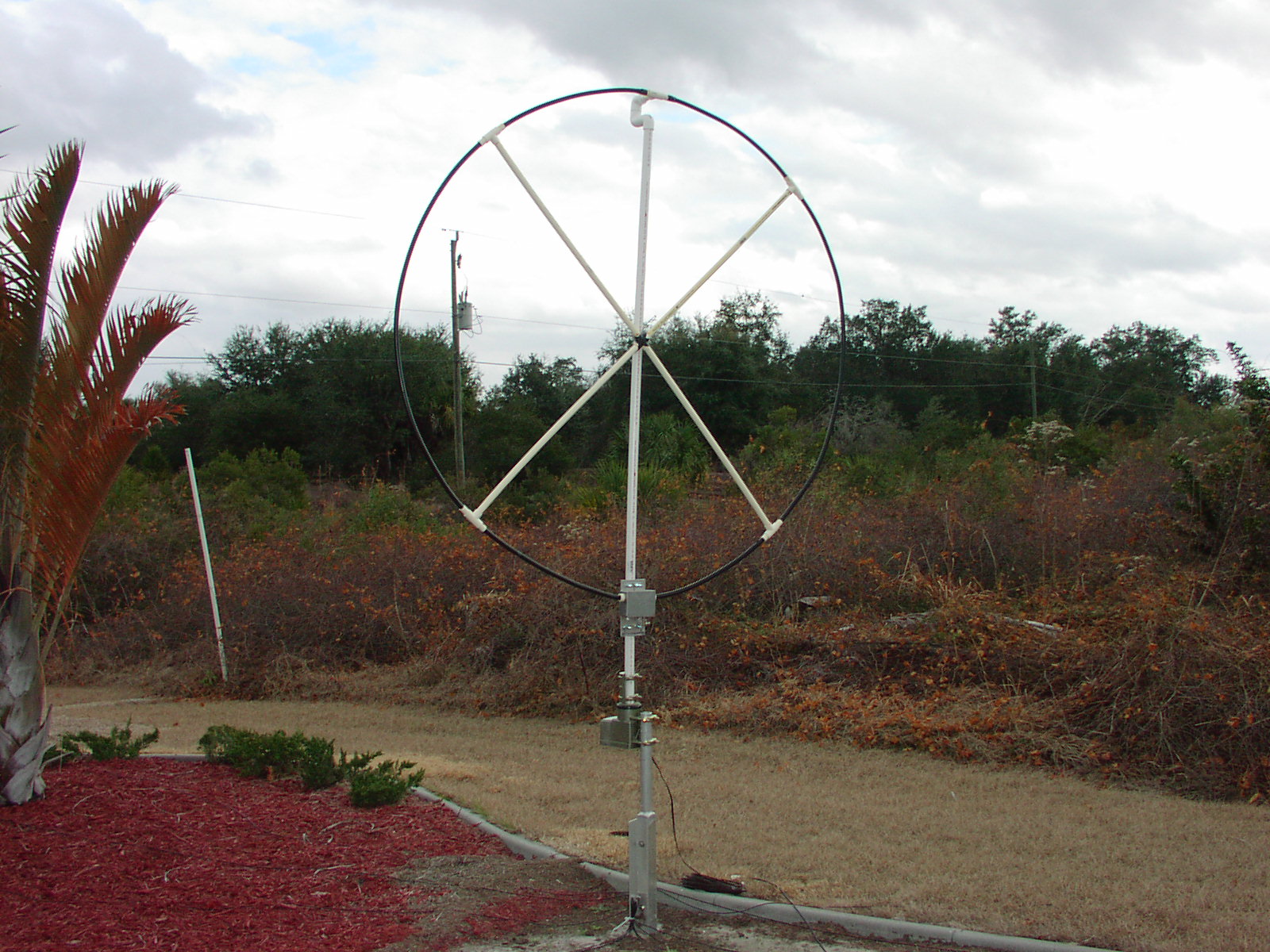 At nite and in the mornings I tested it on the air. The atmospheric noise was just at the radio inherent noise level. The Feedpoint impedance was measured at 16 ohms. At the suggestion of W8WWV, Greg, I installed a torroid transformer with 5:9 turns ratio. The atmospheric noise rose above the radio noise. Now the feedpoint impedance measures at 36 ohms. I could probably change the turns ratio slightly to bring it to 50 ohms but I will maybe do that later.

Here are pictures with the transformer installed. 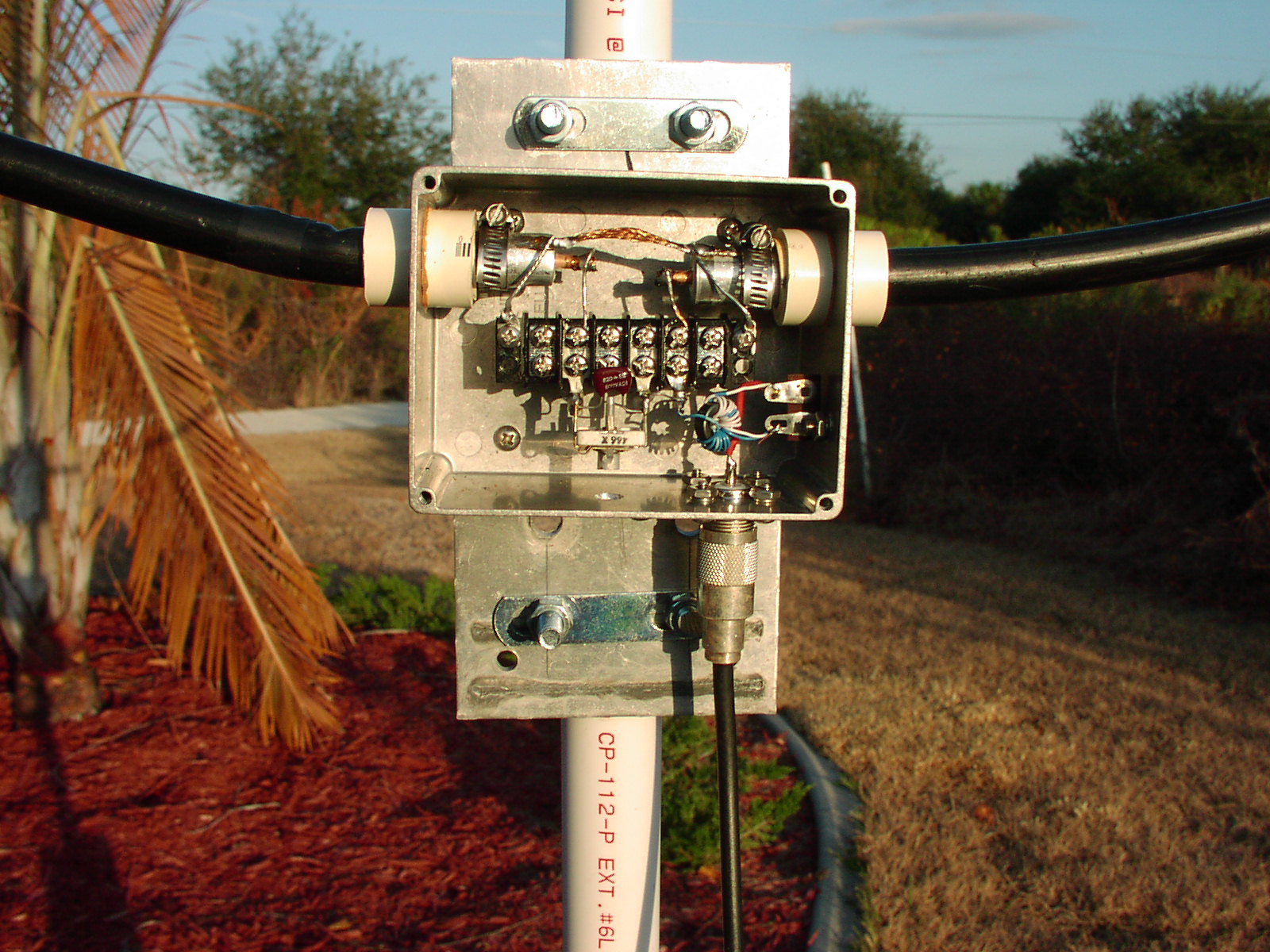 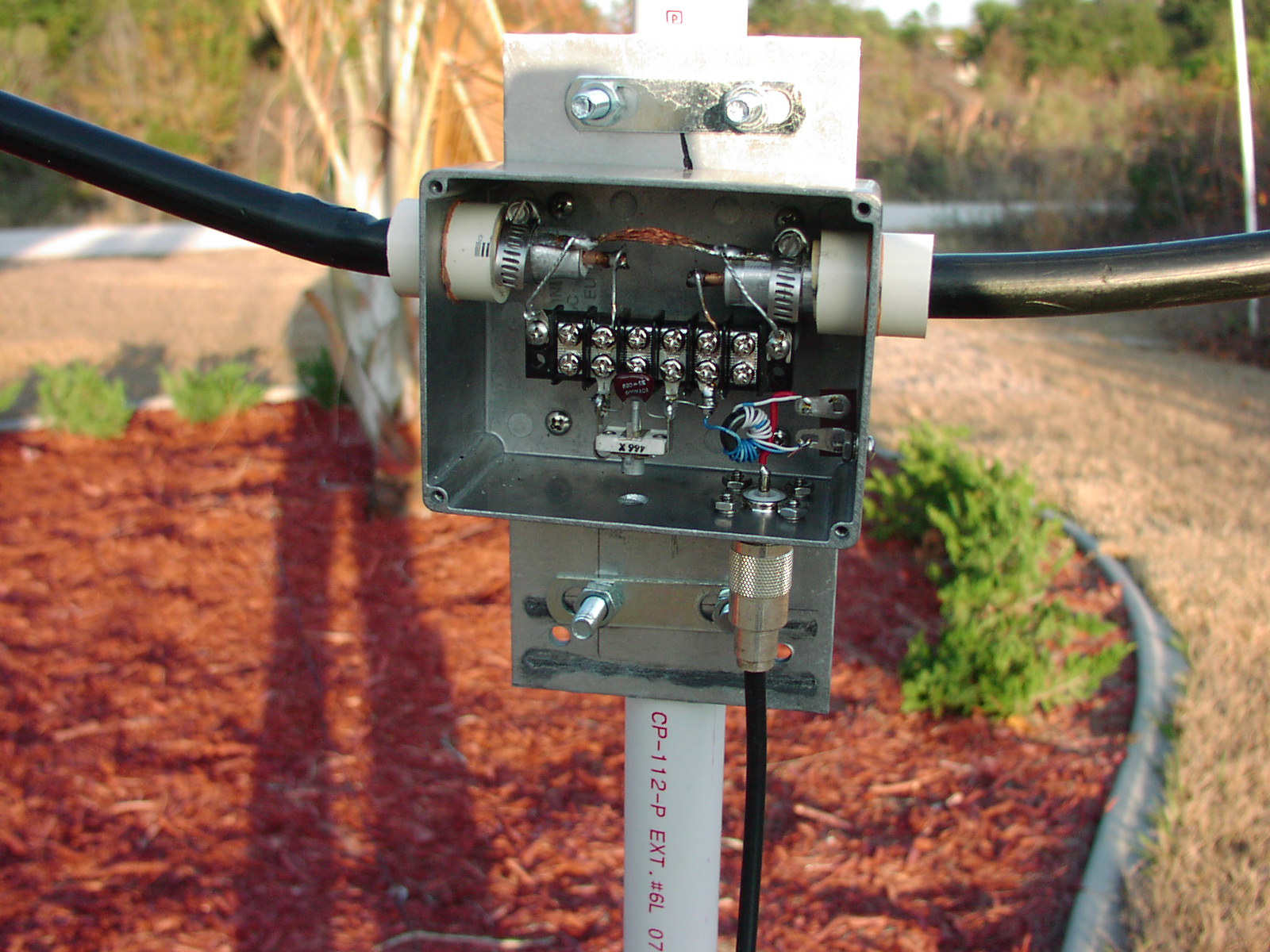 Results:
When the noise on my vertical antenna is S9, the noise on the Loop is S0 ( as long as there are no lightning storms that produce static crashes. When signals are coming in at S9 on the vertical and the noise is S9 on the vertical, the signals are S7 or S6 on the loop but the noise is S0 to S1. Very comfortable listening. I have easily copied Russia, Ukraine, most of EU, all of NA and Carribean if the propagation was acceptable to good. I have not had good propagation to the Pacific in the last few days so no comment as yet. This was assembled 2 days ago and today is January 19, 2010.

I will leave it alone. Worked Cyprus last nite for a new one. The loop removes the noise. Signal strength seems 2 S units less than the vertical on stronger signals. I have yet to get a read on a weak sig. Will keep looking for one. It was suggested by a friend of mine that the rebar in the concrete floor probably detuned it when I was in the initial stages of testing and construction. I am sure he was correct.

Don't get me wrong, the signals are typically quite low on these loops but still workable. I find that if I can hear them I can work them becuase I consistently get good reports from the DX stations like 559 or 579.

Caveat: This antenna is not as sensitive as a Beverage or DX Engineering 8 circle array or HiZ 8 circle array, but it does pretty well. Whatever I hear on my K9AY Loop, I also hear on this coax loop. Many times the Signal to Noise is better on this coax loop than the K9AY Loop. I have an A/B switch in the shack so that I can switch between the 2 loop antennas. I also have a Clifton Labs 20 db preamp in the shack, but rarely need it since the loops put out sufficient signal and noise that I do not need any further amplification beyond what my FT-2000 provides.

Yesterday, I heard XU7ACY weak in the noise, but that was very encouraging. To date, I have worked most DXPeditions listening with this loop.
Found that the loop resonant point would drift with either humidity changes or with temperature changes. I think that the trimmer capacitor is affected the most by either humidity or temperature. Today, I installed fixed capacitors ( mica ) to replace the combination of trimmer and fixed capacitors. I had to make a network of parallel and series capacitors to get resonance at 1.825 MHz. It took 921 pf total. I will now watch over the days ahead for any drift in resonant frequency.

Today, I heard XU7ACY weak in the noise again, but that was more encouraging. I worked VK3ZL over 10,000 miles. Very Very Strong Same level on both this coax loop and the K9AY Loop.

Worked VK3IO today 10,200 miles. Very Strong here. More exciting was that while I was tuning the VFO I heard a pileup. I tuned down 1 KHz and there was a DX station giving reports. So, I called up 1 from him and he came back on my first call. It was XU7ACY. !!!!! SWEET, 9,500 miles .This gave me 144 countries on 160 and a new CQ Zone for 34 Zones now on 160. For the past 2 days propagation has been very excellent to the S. Pacific. Using my Clifton labs 20 db preamp in the shack + the FT-2000 IPO and APF CW Filter, XU7ACY was S4 on the meter. Other hams in the USA were hearing him S9 on their Beverages and on their 8 Element arrays. This tells me that both loops are 5 S units lower than the high performance RX antennas which is approximately 30 db lower.

OK, so I have to be patient and wait for propagation to be really strong to work some of these long distance countries. But it can be done. Hopefully this propagation will continue for some days and maybe I can also log one of the DU1 stations.


BTW, these stations are giving me 579 to 589 reports, so my low band vertical is doing it's job on transmit. http://k3zxl.com/Tower_Vertical/ZXL-Super%20Vertical.htm 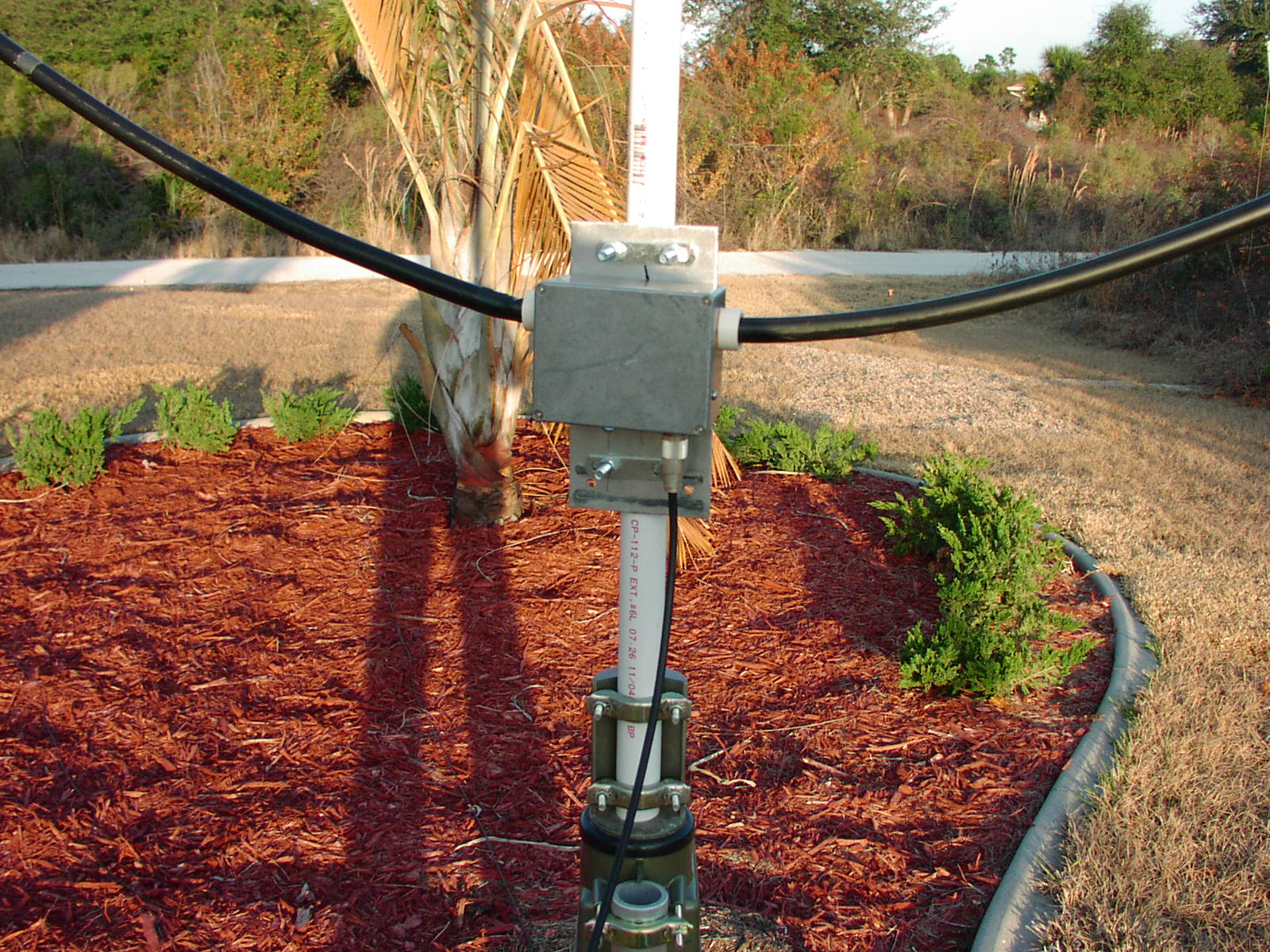 The Schematic of the loop is as shown. The value of the capacitor was chosen for the 80 meter band. My capacitor is in the 900 pf range. Here is the link to Greg's page on his 80 meter loop antenna. http://seed-solutions.com/gregordy/Amateur%20Radio/Experimentation/3805er.htm If you have any questions, feel free to contact me by email. I am good on www.QRZ.com